Electra and the Charlotte Russe 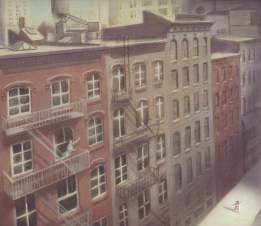 Mama is having a tea party, and Electra is sent to Mrs. Zimmerman's bakery to buy six charlotte russes. A charlotte russe is an extraordinary dessert-a circle of little cakes, called ladyfingers, topped with clouds of whipped cream. Even Mama could not make charlotte russes like the ones you could buy at the bakery. Electra tied the nickels up in her hanky and held the hanky tight in her hand. She kept her hand in her pocket, just in case.

Mrs. Zimmerman tenderly places the charlotte russes in a cardboard box and Electra sets off for home. Electra didn't run and she didn't skip. But she did walk very quickly because she didn't want the cream to spoil. When Electra gets home, though, Mama notices something different about these charlotte russes. Where's the lovely whipped cream? And why does Electra have a tummy ache?

Set in the Bronx in the 1920s, this story about a Greek-American family is based on an incident in my mother's childhood.

When I was a little girl, the stories I loved best were the ones my parents told about their own childhoods. Electra and the Charlotte Russe is based on a story my mother told me, a favorite of mine and my children. I wanted to write it down so other children could enjoy it as well.

My mother's name really was Electra, and she grew up in a multi-ethnic neighborhood in the Bronx (a part of New York City) in the early 1920s. She did have a parrot named Polo, and she did once get into trouble over some charlotte russes. Some of the facts of the original situation have been eliminated from the story (my mother's little brother, for instance) and some elements have been invented to make the story work (like Mrs. DeLuca's cat.) My book portrays a Greek-American family seventy-five years ago, but the story about a child's dilemma and the reassurance of a mother's love is, I hope, a universal one.

Michael Garland, the illustrator, and I talked about the historical setting of the book. He did research at the New York Public Library and consulted books of photographs of period New York life. I sent him copies of old photographs of my mother and my grandmother, and even one of Polo the parrot. The dress that Mama is wearing in the book is modeled on the dress that my grandmother actually wore.

"A beautifully told story of honesty and remorse. The pictures are done in beautiful, warm shades and envelope you in what you are reading. This is one of those stories children will want to hear more than once. . . I recommend this book for those with children of any age."
-- American Reporter

"This appealing story has elements that will be familiar to many youngsters. . . The most endearing aspect of the story is the response of Electra's mother, who understands everything without a word. `Remorse and too much whipped cream," said Mama, 'always cause tummy aches.'
The soft, pastel-like paintings capture the Bronx in the 1920s. . .
-- School Library Journal

"A funny tale to which most readers will relate.
-- Kirkus Reviews

"A picture book confection as delicious and delightful as the extraordinary dessert. Bliss recalls a childhood memory of her mother's and portrays a familial glimpse into the Greek-American family life of the 1920s. . . Enthusiastically recommended as a pictorial resource on Greek-American families. . . A sweet book!"
-- Catholic Library World

"This touching, amusing story is a gem. It tells about the irresistible temptations all children fall victim to from time to time and a mother's unconditional love. While the story needs no enhancement, Michael Garland's softly-colored illustrations are a nice bonus."
-- Manchester Journal Inquirer

"The detailed story and illustrations blend to give both reader and listener insight into that special Mother and Daughter relationship. A must read if you have a little girl."
-- Family Living

For more reviews, check out Electra and the Charlotte Russe on the Boyds Mills Press website.