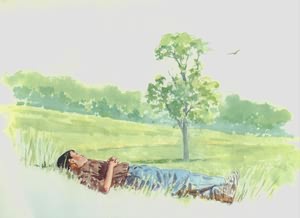 Far up on the hill, far beyond where the eyes of the house could see, was a meadow of long, soft grass. A forest circled this meadow, and once this meadow had been forest, too. Someone had cleared the trees, leaving only one tree to grow tall in the center, a black walnut tree, taller than any tree around. The red-tailed hawk perched in this tree and looked out over the meadow and the whole hillside below. 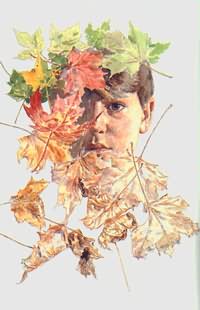 But the meadow held a secret: every year, at blackberry time, the hawk spoke to Matthew, and taught him how to really listen, feel, smell, taste and see. The hawk taught him how to listen to the milkweed seeds sailing through the air, how to feel the moonlight as it touched him, how to watch a mountain eroding, and how to smell the coming of night.

All these things and more Matthew learned, but he did not remember it was the hawk who taught him. "The unknown," said the hawk, "is simply the not-yet-known. Think beyond your thoughts so that you can find a way to do what you once thought impossible."

With a poet's touch and a storyteller's sure hand, Corinne Demas Bliss has given us an important ecological fable for our time.

Selected by Woman's Day as one of the "Best Books for Kids."

Selected as an outstanding children's book about the environment. by the Chicago Tribune, the Washington Post Book World, the Orion Society, and the Center for Children's Environmental Literature.

I wrote this story for my son, ten years before it became a book. The black walnut tree was inspired by a real tree on the hillside behind my family's house in Mt. Kisco, New York, where a hawk really did like to perch. The field around that tree was small, and the meadow in the story is more a meadow of my imagination. 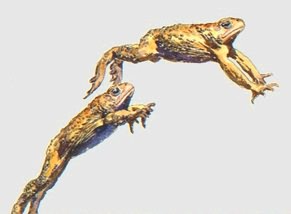 My editor, Jane Yolen, selected Ted Lewin to illustrate the book. He found a black walnut tree in rural Pennsylvania to use for a model for the story. To get the illustrations for the milkweed page just right, he spent a whole day watching milkweed being carried off in the wind. Ted is a master wildlife illustrator, and you can see that the hawk in the story ages, just as Matthew does.

The Regional Touring Theatre Company of Western Illinois University adapted Matthew's Meadow for its Fall 1993-Spring 1994 season. Directed by Raymond Gabica, the production was staged at seventy-five mid-western elementary and middle schools. The entire set, costumes, actors and crew, all packed into a single van. The set was designed so a gymnasium could be quickly transformed, with a carpet rolled out for the meadow and a tree that was assembled in chunks. The hawk was a puppet, in the style of classical "Bunraku" Japanese puppet theatre, where the actress was visible behind the life-size bird she handled.

"A beautiful story about a sensitive and thoughtful young boy and his 'conversation' with a hawk."
--Woman's Day

"This is a book of deep wisdom and spirit. It speaks to adults about the process of growing up and staying connected to one's self and the land. It is a book to share with teenagers as well because it tells the story of a boy turning into a man. Even though the book deals with some complex concepts, young children can listen to the magic at the center of the story and be captivated."
--Nature's Course (A publication of the Center for Children's Environmental Literature)

"Matthew's Meadow is something special, a picture book which will grow in meaning for your children as they grow up."
--Chicago Parent

"Our own natural world is shown through the magic and wisdom of this beautiful story. Corinne Demas Bliss has woven an important ecological story for our time, and the illustrations truly bring this magical tale to life."
--Catholic Library World

"An ecological fable that awakens the reader to a deeper understanding of the Earth. . .A splendid book to share with the whole family."
--Saint Paul Pioneer Press

This beautiful story of a boy growing into manhood provides an alternative (non-violent) image of what it means to be a man. Usually referred to as a young child’s book, I have seen this story move adult men to tears. Not to be missed.
--Center for Partnership Studies

Ted Lewin grew up in Buffalo, New York. He always knew he wanted to be an illustrator, and as a child copied the work of artists he admired, including Winslow Homer. He financed his studies at Pratt Institute of Art as a professional wrestler. Ted has illustrated more than a hundred books including The Disappearing Island. His many awards include a Caldecott Honor. Ted and his wife Betsy, also an illustrator, live in Brooklyn, New York with their two cats, Slick and Chopper, but they travel all over the world to work on children's books. Gorilla Walk is a collaboration based on their expedition to the mountain gorillas in Uganda. To learn more about Ted, check out his autobiographical book I Was a Teenage Wrestler as well as Touch and Go: Travels of a Children's Book Illustrator.
Visit Ted Lewin's website at www.tedlewin.com.