Im on sabbatical leave from Mount Holyoke this year and ordinarily wouldnt be here on campus for commencement, but the opportunity to meet Judy Blume was too strong a draw. I cant think of any commencement speaker, or honorary degree recipient weve had in the twenty-two years Ive been teaching here who has had a greater direct impact on the lives of my students. In fact I cant think of any other individual who has helped so many young people navigate the difficult waters from childhood to adulthood. 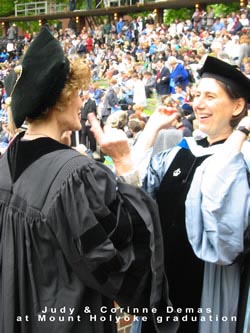 I first learned about Judy Blume about thirty years ago, at a dinner party with a group of English department academics. I was introduced to the hosts twelve-year-old daughter, Ellen, who was clutching a book. She wasnt just holding this book, she was clutching it tightly against her chest.
What are you reading? I asked her.
 Are You There God? Its Me, Margaret, she said, and very reluctantly loosened her grip and turned the book so I could read this most unusual title and see the name of the author, Judy Blume.
Ellen just got her period, her mother whispered to me later. Shes read that book a hundred times. All the girls in her class are reading it.
I was, naturally, curious, about this book, and when I read it, myself, I wished it had been around when I was twelve. Judy Blumes Margaret is a perfectly realized first person narrator, whose voice is so credible and so intimate, even the loneliest pre-teen reader feels as if shes acquired a frienda friend who is not only brave enough to talk about the kinds of things young peoples literature had managed to avoid mentioning entirely for generations (heroines were indisposed and rested on sofas, but you were never told why), but who dares to ask the most enormous question Are you there, God? and put it in the same paragraph with a reference to a mundane concern, like moving to New Jersey.
Though I missed out on Judy Blume when I was a child, fortunately she was there for my students, and for my own children. Last week I went back through their bookshelves and re-read some of their favoritesstarting with Are You There, God, its Me, Margaret? --this well-worn copy that was read by my son, now thirty-one, passed on to my daughter, and which circulated through a dozen grateful readers in-between. I re-read The Pain and the Great One, an insightful picture book that tells the same story from two entirely different points of viewtwo siblings who each believe their parents love the other one best, and Freckle Juice, which gets to the heart of every kids desire to change the way he looks, Superfudge, the delightful sequel to Tales of a Fourth Grade Nothingand her best-selling adult novel, Summer Sisters, which my daughter, who is now eighteen and had been reared on Judy Blume books, couldnt put down. In all of these I found myself marveling at the economy and clarity of prose, the energy of the dialogue, the humor, the resonance of the theme, and the way these books are so right on target about emotional truths, without ever being sentimental.
Academics read lots of books, but most of us dont clutch them anymore. The books we read and teach and study are books we admire, books we may be inspired bybut rarely do we feel that tremendous, almost visceral connection to them, as we did with certain books of our childhood. Here at Mount Holyoke the students in my English classes encounter the works of literature that, I hope, influence how they view the world, but long before they arrived here, it was Judy Blume who helped shape them into the people that they are.
Judy, thank you.